Please take a look at NFAJ’s visitor guidelines and infection prevention measures before your visit.

*This year, all screenings on and after August 2 will be held at B1 Theatre due to the maintenance of Nagase Memorial Theatre OZU.

*Schedule and titles of the programs may change.

*Further updates on our screening and exhibition events will be announced on this page. 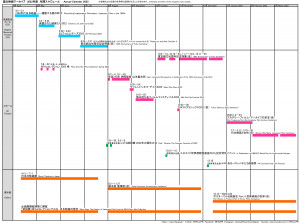 Facing the popularity of foreign films, the domestic market share of Japanese cinema declined in the 1990s. It was also the decade of social and economic turbulence caused by the end of the Cold War, the collapse of the bubble economy and other incidents. This program will show representative Japanese films in this era, from hit movies against this difficult situation to radical movies directed by newcomers who had drawn attention as independent filmmakers.

This is the 11th installment of “Cinema: Lost and Found,” the series that showcases valuable films newly collected and restored by NFAJ.

May 28 – June 23, 2022
Co-organizers: The Delegation of the European Union to Japan, and the embassies and the cultural institutes of the EU member states in Japan

EU Film Days is a series showcasing films from the member states of the European Union (EU). Now in its 20th edition (14th to be held at NFAJ), EU Film Days brings together a wide variety of films, introducing the diversity of European society and culture to audiences in Japan.

The 90th Anniversary of Toho:
A Film History of Modernization and Innovation [Part 1]

Toho, which has always been one of the leading studios of Japanese cinema, is marking its 90th anniversary this year. This program traces its glorious history by presenting its eminent works of masters, its beloved movies featuring popular stars, and its representative genres and series.

Films from the NFAJ Collection: Spring 2022

This program will introduce wide variety of NFAJ film collection.

Since his directorial debut in 1924, Kajiro Yamamoto (1902-1974) exercised his abilities in various genres from comedy to melodrama to jidaigeki to musical, as well as showing great facility in social films. Commemorating the 120th anniversary of this prominent director of Toho Studio, this program showcases a selection of his renowned works.

This is an established program that shows silent films mainly from NFAJ collection with the live music accompaniment or the oral explanation of the benshi film narrator as many silent film festivals around the world.

Pia Film Festival, which has been supporting young and upcoming filmmakers and introducing new talent to audiences both in Japan and overseas, now its 44th edition, holds again the “PFF Award Competition,” the biggest competition for “self-produced films (aka Jishu-Eiga)” in the world, special programs and screenings with film personalities as guest lecturers.

The 90th Anniversary of Toho:
A Film History of Modernization and Innovation [Part 2]

Toho, which has always been one of the leading studios of Japanese cinema, is marking its 90th anniversary this year. This program traces its glorious history by presenting its eminent works of masters, its beloved movies featuring popular stars, and its representative genres and series.

This is the program co-organized with Tokyo International Film Festival to showcase remarkable Japanese films which we expect to be internationally acclaimed.

Since 2014’s program Film Treasures from the Museum of Modern Art, we have introduced the activities of film archives in the USA including UCLA Film & Television Archive and the Library of Congress, showing American movies from their collection. This year, films from the collection of the Academy Film Archive will be screened.

Women Who Made Japanese Films (tentative)

In this program we focus on the achievements of female directors and female staff such as producers, scriptwriters, art directors, costume designers, editors, and script supervisors to trace the footsteps of female cineastes in Japanese film history.

As for the educational programs held at B1 Theatre, please see the following page.

Kids’ Cinema: The Summer Vacation of 2022

This is the program for children up to junior high school students. It intends to cultivate their aesthetic sensibility and image literacy through the wonder and joy of films on screen.

In Celebration of UNESCO World Day for Audiovisual Heritage

Co-organizers: The embassies and the cultural institutions of V4 countries

Animation and other films of Visegrad Four (V4: Hungary, Slovakia, Czech Republic and Poland), along with their cultures, are showcased for children in this program.

For nearly 120 years since the arrival of the first permanent screening venue in Japan, the experience of seeing movies has been changing according to social circumstances and lifestyles. Through the articles including photos, souvenir movie programs, magazines, books, and items used in theatres, this exhibition traces the history of movie theatres in Japan before the rise of multiplexes, featuring their birth, their golden age after WWII, the “art house” boom and others.

While collaborating with eminent scriptwriters to create many masterpieces, director Akira Kurosawa, inspired by world great writers, wrote scripts himself to mature as a screenwriter. This exhibition figures out the mystery of his writing process by analyzing the drafts of his works including Seven Samurai (1954), presenting his scripts offered to other directors, and introducing his newly discovered script which has not yet been made into a film.

As the fourth installment of the serial exhibition tracing various strands of film history through posters, this exhibition focuses on horror films in Japan and overseas, the venerable genre beginning in the silent era.