Eiji Tsuburaya: On the 120th Anniversary of His Birth 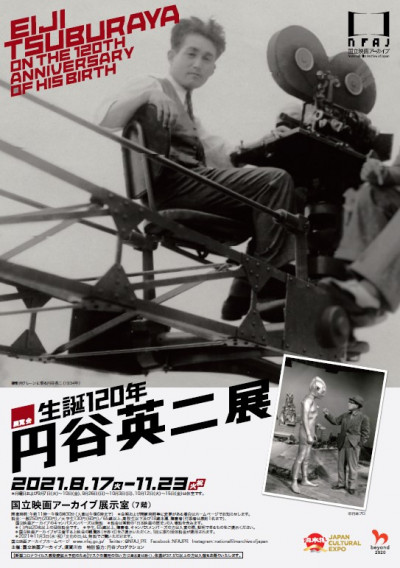 What would Japan’s visual image culture be without Godzilla or Ultraman? We can scarcely imagine. Japanese movies and television productions made with the skillful use of special effects have thrilled fans around the world and earned enduring respect. The pioneering force behind those world-renowned effects was Eiji Tsuburaya (1901-1970), a man revered as Japan’s “father of special effects.” This year marks the passage of 120 years since his birth.

Tsuburaya was born in Sukagawa, Fukushima Prefecture. Although he aspired to be a pilot as a youth, he entered the film industry in Tokyo in 1919. He joined a group led by the talented and energetic director Teinosuke Kinugasa in Kyoto and later distinguished himself as an ambitious young cameraman of period dramas featuring Shochiku’s new star, Chojiro Hayashi (later known as Kazuo Hasegawa). Tsuburaya began developing special effects after being captivated by the American picture King Kong (1933), and this eventually led to his bringing miniature effects to Toho Studios’ aviation movies. His work for the wartime film The War at Sea from Hawaii to Malaya (1942) made the entire Japanese film industry take notice of special effects’ value. After the war, he applied his seemingly boundless ingenuity to become Japan’s first “special effects director” and help Toho Studios send numerous war, monster, and science fiction movies into theaters. In 1963, he established Tsuburaya Productions, where he paved the way for special effects on television. His dedication to nurturing up-and-coming talents is legendary.

The techniques featured in Toho Studios’ special effects extravaganzas, Tsuburaya Productions’ Ultraman series, and various other productions have been the subject of highly fruitful research in recent years, and the accomplishments and expertise of renowned technicians are frequently highlighted in exhibitions. However, relatively few attempts have been made to establish Tsuburaya’s standing within Japanese film history. This exhibition will commemorate the 120th anniversary of Tsuburaya’s birth as an event co-organized with Sukagawa City. It will present Tsuburaya’s life and times while giving attention to his accomplishments as a young man―among them Kaguya-hime (1935), an early work that was found in the United Kingdom.

Screenings of Kaguya-hime will be will be held as follows:

For more detailed information, please see the this page.