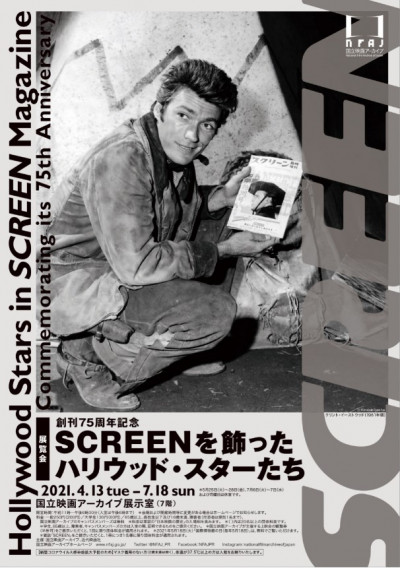 Admission：
Regular￥250 (Group Admission ￥200) / University & College Students ￥130 (Group Admission ￥60)*Free for Seniors (age 65 or over), High School Students and under 18, Disabled People (with one companion)
*Free on May. 18, International Museum Day.
*Group discount is available to holders of any issue of SCREEN magazine (discount applies to one person per issue).

Kindaigeisha’s Screen is a monthly periodical that provides the latest on foreign films and particularly Hollywood stars. It debuted in May 1946 as a quarterly collection of portraits, its first edition featuring Tyrone Power and Setsuko Hara on its front and back covers. With its third edition, issued in February 1947, Screen made a fresh start as a monthly “magazine for presenting and appreciating American cinema.” Not long after, it established itself as a foreign movie fan magazine by expanding its coverage to European films. Loved by movie fans ever since, Screen will celebrate the 75th anniversary of its first issue in May 2021. Not content to publish cookie-cutter articles reliant on secondhand information and photographs from stars’ home countries, Screen gathers its stories directly by basing its own correspondents in Hollywood. It thus occupies a unique position in Japanese foreign film journalism.

This exhibition will trace the “genealogy” of Japanese movie fans’ passions up to the 1990s by presenting Screen‘s gorgeous celebrity photographs, many taken at photoshoots and film festivals, as well as valuable images chronicling stars’ visits to Japan.

While exhibiting Screen over the years, we will also highlight the achievements of Yani Begakis, a Hollywood correspondent who has contributed to the magazine for nearly half a century.

We invite you to enjoy a collection of Screen photos depicting international film personalities who enchanted Japanese film fans over the years.

*Some of the featured actors were mainly active in European films and other non-Hollywood pictures.