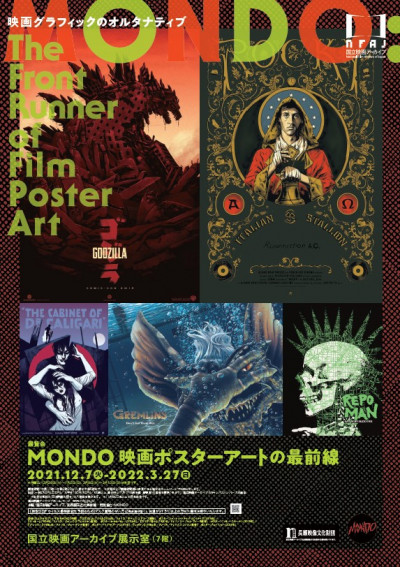 Posters have been at the heart of film advertising for more than a century. While their styles have evolved over the years and from place to place, they have always generated excitement among all who love to go to the movies. Today, as the Internet takes an increasingly prominent role in advertising media, a movement is underway to restore the movie poster as an art form existing outside the realm of advertising.

At the forefront of this movement is Mondo, a company based in Austin, Texas, U.S.A.  Mondo commissions keenly perceptive designers and illustrators to create original posters that transcend the boundaries between “old” and “new” movies. Mondo was established in 2004 as a T-shirt shop affiliated with the Alamo Drafthouse Cinema chain. Since then, it has produced movie soundtracks, artworks, and other film-related items. But more than anything else, it is its screen-printed movie posters―sold as limited-edition merchandise through its online shop―that have attracted passionate fans around the world.

MONDO: The Front Runner of Film Poster Art is the ninth in a series of film poster exhibitions held jointly by the National Film Archive of Japan and the National Museum of Modern Art, Kyoto. It will present 71 posters provided by the Mondo art collective. Their subjects will cover everything from silent movies to the latest productions. While Mondo’s posters retain the essence of the original films, that each artist’s individual style has been respected is unmistakable. The result is a collection that is in no way uniform. We invite you to enter the world of “alternative posters,” a domain distinctly different from advertising, by seeing the actual prints, each rich with texture.