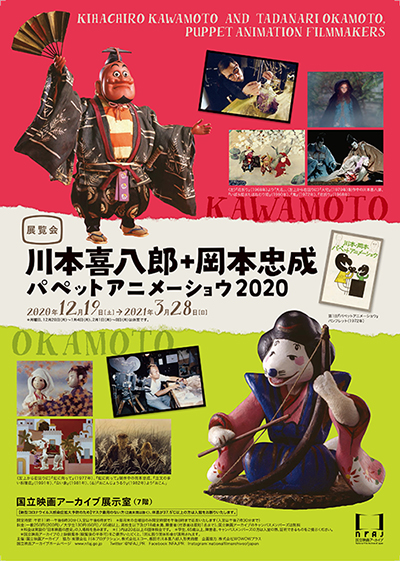 Kihachiro Kawamoto (1925-2010) and Tadanari Okamoto (1932-1990) were artists who each left unparalleled achievements in Japanese animated film, particularly in stop-action animation. Both studied under Tadahito Mochinaga, who laid the genre’s foundation in Japan, but their subsequent paths diverged substantially.

Kawamoto polished his craft in Czechoslovakia, which was a leader in the puppet film genre. Then, pouring his soul into the fine-featured characters he created, he discovered new avenues for TV historical puppet dramas and collaboration with overseas artists as an artistic adventurer who devoted his life to puppets. On the other hand, Okamoto set his sights on children. He demonstrated creativity primarily in the educational film genre by animating various materials―including wood, leather, cloth, yarn, paper, and clay―with free and ingenious use of flat, three-dimensional, and semi-three-dimensional qualities. These two artists, born on the same day seven years apart, were friendly rivals who understood each other well.

In the 1970s, Kawamoto and Okamoto united to produce shows titled “Puppet Animashow” that combined screenings of their works and puppet theater performances. The shows were held six times and attracted great attention. Later, when Okamoto passed away and left his work The Restaurant of Many Orders (1990) unfinished, it was none other than Kawamoto who stepped in to lead its completion.

In 2004, the National Film Archive of Japan (then called the National Film Center) presented an exhibition titled Artworks from the Animation Films of Tadanori Okamoto. And in 2017, we presented an exhibit honoring Kawamoto and Okamoto’s mentor, Tadahito Mochinaga. Now, in 2020, ten years after Kawamoto’s passing and 30 years after Okamoto’s, we again shed light on this genre and retrace the footsteps of these two puppet animation artists.